A Tale of Two Causes
Share:FacebookTwitterLinkedInEmail

A Tale of Two Causes 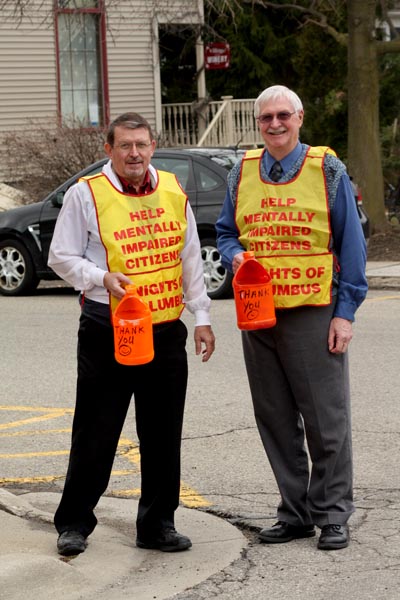 This past weekend, no matter what main road I drove on, men in orange vests stood in intersections and offered a Tootsie Roll in exchange for a monetary donation to aid retarded children.In most cases, several local chapters of the Knights of Columbus are the volunteers for this worthwhile endeavor. One cannot help but admire these men who, in Michigan at least, endure some very difficult weather conditions, not to mention the inherent danger of walking between moving cars.

This Tootsie Roll “rite of spring” has been around for so long that I cannot recall a time when it didn’t exist. And during all these years, I have never heard anyone complain about the drive or write negative “letters to the editor” criticizing the cause. The general consensus is that such a worthwhile program deserves the support of the people. And, besides, even if one cares little for retarded children, a Tootsie Roll is a tasty little treat.

Now let’s imagine a different cause. What if the local Knights decided to hand out rolls of Lifesavers. And instead of the words “Help Retarded Children” emblazoned in red on the orange vests were the words “Help End Abortion.” Would there be an overwhelming acceptance on the part of drivers? Would the volunteers be universally lauded for the selfless service? Would the Knights raise the same amount of money? Would the Knights even get permission to hold the fundraiser? I doubt it. Many drivers would keep their windows closed and stare icily ahead. Others would open their windows and berate the men for trying to deny women a fundamental right. The money collected would be significantly less even if the Knights were allowed to be there, which would be unlikely.

But why? Why is helping retarded children a good while trying to save the lives of unborn children an evil? The only difference is that the retarded child has already been born, while the unborn child is still within the mother’s womb. Well, actually, there is another difference: It is legal to kill the unborn child, while killing a born retarded child is not. It’s the legality of abortion that gives the pro- death crowd a “cover” for defending the indefensible. A law, no matter how heinous, carries a “stamp of approval” from the government that many people accept at face value. Many others do not accept it, thus creating a controversy.

Now let’s get back to our Tootsie Roll situation. As stated above, under current law, killing a retarded child is illegal. But will the prohibition always remain intact? Before the reader answers in the affirmative, consider the fact that 90% of pregnant women who learn that their baby will have Down’s Syndrome (DS) will abort the child.Columnist George F. Will, who has an adult son with DS, labeled the early-detection process “a search and destroy mission.” This high percentage of abortions is rather clear evidence that giving birth to a mentally disabled child isconsidered far too burdensome for most pregnant women. But we’re still just talking about abortion, right? Are we?

In 1993, Princeton University bio-ethicist Peter Singer declared that a newborn child should not be considered a person until thirty days after its birth. He added that a doctor who delivers a baby should, with the consent of the parents, be permitted to kill the child immediately if the baby has significant disabilities. Over a decade earlier, Singer had written that “. . . the life of a newborn is of less value than the life of a pig, a dog, or a chimpanzee.” Another university professor, one Jeffrey Reiman, wrote recently that newborns do not “possess in their own right a property that makes it wrong to kill them.” In 2008, Baroness Molly Meacher, a member of the British House of Lords, while debating a law to protect disabled children, declared, “My belief is that there are children, born at those very early ages, who are not viable people. It would be in their best interests to have been aborted.”

“But these are just theories, not reality,” someone might protest. Fair enough. But columnist Wesley J. Smith, writing for The Weekly Standard, summarizes part of a 1997 study published in Lancet, the British medical journal:

According to the report, doctors were killing approximately 8 percent of all infants who died each year in the Netherlands. That amounts to approximately 80-90 per year. Of these, one-third would have lived more than a month. At least 10-15 of these killings involved infants who did not require life-sustaining treatment to stay alive. The study found that a shocking 45 percent of neo-natologists and 31 percent of pediatricians who responded to questionnaires had killed infants.

Can’t happen here? Are you sure? If a child who has an extra chromosome can be killed prior to birth, is it a stretch to believe that someday he can be killed after birth? What signs in our culture of death would suggest otherwise? If killing disabled children becomes legal, the Knights of Columbus might learn that raising money for retarded children will be considered “too controversial,” and they might also learn that many city councils will vote to keep the Knights out of intersections.