When Sarah Palin said the Pope’s views on poverty were “kind of liberal” and Rush Limbaugh called them “pure Marxism,” the media were aghast. In a rare moment of unity, scoffers joined now-and-then Catholics, former Catholics, and practicing Catholics in protest. Palin and Limbaugh quickly, and prudently, said they had meant no disrespect.

Ironically, their criticisms of Francis’ views on poverty were perfectly valid (though Rush’s categorization was greatly overstated).

The Apostolic Exhortation in question, The Joy of the Gospel, is over 50,000 words in length, broad in scope, and in most respects laudable. For example, it denounces the “new idolatry of money” and the rise of a relativism that denies moral truth. It also movingly appeals for greater generosity toward the millions of people in need.

Nevertheless, the parts that are about poverty are clearly liberal-progressive in perspective. Here are some key examples with paragraph numbers from the exhortation:

“Just as the commandment ‘Thou shalt not kill’ sets a clear limit in order to safeguard the value of human life, today we also have to say ‘thou shalt not’ to an economy of exclusion and inequality . . . Today everything comes under the laws of competition and the survival of the fittest, where the powerful feed upon the powerless. As a consequence, masses of people find themselves excluded and marginalized: without work, without possibilities, without any means of escape.” (Par 53)

The first sentence makes a traditional moral point. But the next two take a liberal-progressive turn. Moreover, though people in Third World countries may lack opportunity or a means of escape from poverty, those in developed countries seldom do. The best illustrations of this fact are the many examples of poor people who come to the United States from foreign lands and overcome their poverty in a relatively short time.

“In this context, some people continue to defend trickle-down theories which assume that economic growth, encouraged by a free market, will inevitably succeed in bringing about greater justice and inclusiveness in the world. This opinion, which has never been confirmed by the facts, expresses a crude and naïve trust in the goodness of those wielding economic power . . . .” (Par 54)

“This imbalance [between wealth and poverty] is the result of ideologies which defend the absolute autonomy of the marketplace and financial speculation. Consequently, they reject the right of states, charged with vigilance for the common good, to exercise any form of control.” (Par 56)

This passage mirrors the liberal/progressive view that free markets are the problem and state control is the solution. This view is highly questionable at best, as Popes Leo XIII and John Paul II noted. In Europe and the U.S., governments have arguably had too much control, as the failed policies of entitlements and welfarism have demonstrated.

“Some simply content themselves with blaming the poor and the poorer countries themselves for their troubles . . . [claiming] that the solution is an ‘education’ that would tranquilize them, making them tame and harmless.”(Par 60)

Blaming the poor and poorer countries is, as Francis suggests, too easy an answer. But the idea that they are never to blame—a liberal/progressive tenet—is also fallacious, especially in the case of developed countries, where opportunity exists.

“[Solidarity] is a spontaneous reaction by those who recognize that the social function of property and the universal destination of goods are realities which come before private property. The private ownership of goods is justified by the need to protect and increase them, so that they can better serve the common good; for this reason, solidarity must be lived as the decision to restore to the poor what belongs to them . . . It must be reiterated that [quoting Paul VI] ‘the more fortunate should renounce some of their rights so as to place their goods more generously at the service of others.’” (Pars 189, 190)

Francis is not the first modern pontiff to embrace the liberal/progressive idea of collective ownership of goods. Unfortunately, he and the others ignore the fact that Pope Leo XIII expressed the opposite view in his remarkably insightful encyclical, Rerum Novarum.

Leo denounced “the main tenet of socialism, community of goods,” arguing that “the first and most fundamental principle . . . if one would undertake to alleviate the condition of the masses, must be the inviolability of private property.” He went on to argue that the key to overcoming the disparity between rich and poor is not to take away the property of some and give it to others, “which neither justice nor the common good allows,” but instead to enable larger numbers of people to become property owners. And while acknowledging that all people have a duty to be generous to those in need, he stressed that this duty is one of charity rather than of justice. (That distinction clearly suggests that the duty falls on individuals rather than the state.)

“For the Church, the option for the poor is primarily a theological category rather than a cultural, sociological, political or philosophical one. God shows the poor ‘his first mercy.’” (Par 198)

This passage raises the question why so much of the encyclical is focused on those other categories rather than theology. Francis speaks of “inequality” numerous times, culminating in this assertion: “Inequality is the root of social ills.” (Par 202) Yet inequality is not a theological concept. From a theological standpoint, the root cause of social ills is sin. The term “inequality” belongs to some, or all, of the other categories. It is also a recurring term in liberal/progressive political theses.

The traditional Catholic perspective on poverty may be summarized as follows:

Because humans are tainted by original sin, their intellects are clouded and their wills weakened; thus, though capable of wisdom and good, they are also susceptible to foolishness and evil. Foolish and/or evil behavior, whether individual or collective, produces social ills, one of which is poverty. Some people are poor because of conditions created by others (the traveler helped by the Good Samaritan); others, because of their own shortcomings (the Prodigal Son); still others, by both.

This traditional Catholic perspective is supported by modern psychology and sociology. In contrast, the liberal/progressive view— that “society” or “capitalism” is always the villain and poor people are always innocent victims—is founded on oversimplification of complex realities.

The great irony of our time is the inclination of many Catholic and other Christian intellectuals to abandon the insights of traditional theology for ill-considered socio-political theories, notably Progressivism. They forget the delicate balance between 1 Jn 3:17, “How does God’s love abide in anyone who has the world’s goods, and sees a brother or sister in need and yet refuses help?” and 2 Thessalonians 3:11, “If anyone is not willing to work, let him not eat.”

Returning to the traditional Catholic perspective on poverty would enable us to condemn the external causes of poverty—apartheid, slavery, communism, caste systems, exploitation, disenfranchisement, and denial of educational and employment opportunity—without ignoring the internal cause, personal irresponsibility.

Finally, it is important to note that respectful criticism of Pope Francis’ view of poverty gives no offense to him, the Catholic Church, or the Christian concept of love of neighbor. Rather, it exercises the “critical thinking” and “moral discernment” that Francis himself urges in paragraph 64 of this very exhortation. 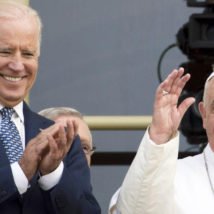