God Doesn’t Ask For The Impossible 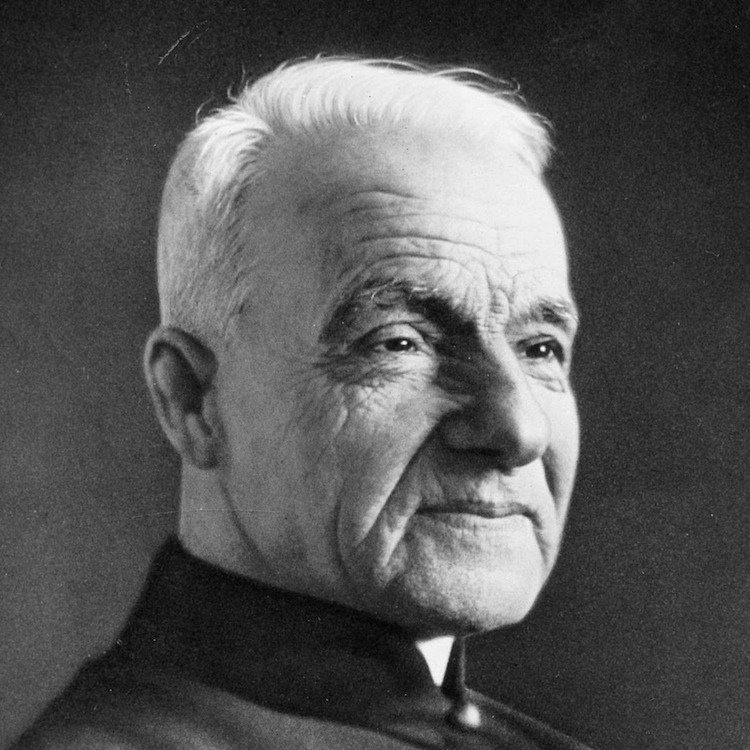 One of the most remarkable modern-day North American saints was the Canadian religious brother Andre Bessette, who died in 1937 and was canonized in 2010. The youngest of twelve children, he eventually entered the Holy Cross Order as a religious brother; because of his poor health, however, he was assigned the role of porter, or door keeper. In this capacity, he had the opportunity to meet, and pray for, numerous people suffering great spiritual or physical difficulties—and his prayers resulted in many cures. Brother Andre always gave the credit to St. Joseph, to whom he had a great devotion—and St. Joseph always seemed to come through. When a group of religious sisters asked his prayers for more vocations, he said, “How many do you need?” Not knowing what to say, one of the nuns answered, “Twenty,” to which the saint responded, “Well, cut out a paper chain with twenty figures and put it around the neck of St. Joseph’s statue.” The nuns obeyed, and within a short time, they had exactly twenty new postulants. A priest had no idea how he was going to pay the mortgage of the orphanage he was in charge of, so Brother Andre asked him, “Who is the orphanage named after?,” and when the priest answered, “St. Joseph,” he was told, “Then write a note saying, ‘St. Joseph, pay your bills!,’ and put it in front of his statue.” The priest did so—though using more polite language—and the money he needed was soon provided from an unexpected source.

Brother Andre was best known for the many physical cures resulting from his prayers, though it grieved him when people gave him the credit. “St. Joseph is the intercessor,” he insisted, and when a man in Montreal disagreed, saying, “St. Joseph is worthless; you’re the one who gets graces for us,” Brother Andre was so shaken and distraught he had to be put to bed in order to recuperate. Healing miracles attributed to him were granted to people suffering from everything from alcoholism to the last stages of cancer and heart disease, and his mail ran to some 80,000 letters a year. When the number of people wanting to see him became too overwhelming and exhausting, his superiors ordered him to “escape” to the United States for a time—but even then, crowds swarmed around him. Brother Andre went to rest for a week at a parish in California; when the pastor asked him to pray for a few people, he agreed—only to have 500 people show up. While visiting a cousin in New England, he and his relative went out to dinner at a nearby hotel—only to find 1000 people waiting for him. Brother Andre was able to maintain his grueling schedule only because of prayer. At the monastery in Montreal, he loved to hide behind the main altar, where he could pray for hours at a time without anyone seeing him. On one occasion the priest saying Mass there, during his homily, praised “the venerable old man who presides over this sanctuary.” Brother Andre didn’t realize the priest was talking about him; instead he remarked, “How well he preached about St. Joseph!” When Brother Andre finally died at the age of 88, after exhausting himself in the service of others, one million people in Montreal filed past his casket (Patricia Treece, Nothing Short of A Miracle, pp. 97ff). Prayer gives us the strength to serve the Lord, and prayer allows miracles to occur—and you and I must be persons of prayer if God’s grace is to be fully at work in our lives.

The story of St. Andre Bessette has some obvious parallels to the Gospel passage (Mk 1:29-39) for the 5th Sunday in Ordinary Time. Everyone was crowding around Jesus, and many miracles were worked by Him—but the Lord made a point of slipping away in order to spend time in prayer. This gave Him the energy and strength He needed to continue preaching and working miracles not only in Capernaum, but also throughout all of Galilee, and eventually, in Judea and Jerusalem itself. In the 1st Reading Job (7:1-4; 6-7) describes his life as a hopeless drudgery; when that seems to be the case for us, it’s a sign we need to pray more than ever. In the 2nd Reading St. Paul (1 Cor 9:16-19, 22-23) describes his ministry of preaching the Gospel—a ministry he was able to complete successfully only because he spent long hours in prayer. The necessity of prayer can be summed up very simply: God is the Source of life; the purpose of life is to serve and come closer to Him; we can only serve and come closer to Him if we pray.

The saints have some important things to teach us about prayer. According to St. Cyprian, “If He Who was without sin prayed, how much more ought sinners to pray!” St. Ephrem advises us, “Do nothing at all unless you begin with prayer,” and St. Teresa of Avila informs us that “You pay God a compliment by asking great things of Him.” However, she also warns us that we’re not really praying unless we try to remember to Whom we’re speaking, and try to remain focused on what we’re saying. St. Paul of the Cross instructs us, “Remain in the presence of God. . . . Rest in His bosom, like a child on its mother’s breast, with full and deep confidence,” and St. Jane Frances de Chantal advises, “Follow your own way of speaking to the Lord: sincerely, lovingly, confidently, and simply, as your heart dictates.” This advice was followed by St. Therese of Lisieux, the Little Flower, for she said, “I tell God what I want quite simply, without any splendid turns of phrase, and somehow He always manages to understand me.”

When should we pray? Whenever we have an important decision to make or a problem to solve, whenever we’re grateful or sad or happy or confused or frightened, and whenever we or someone else are in need of God’s mercy or assistance. We can pray while driving or working or doing household chores—but it’s best also to have a specific time set aside each day just for prayer, even if only a few minutes. We should pray, of course, not only to ask for God’s mercy and help for ourselves and other people, but also to praise and adore Him and to thank Him. We can pray aloud and with others, or silently in our hearts, and we should form this habit so that our first impulse—whether some good happens, or something bad happens—is to pray. In the words of St. Andre Bessette himself, “God doesn’t ask for the impossible, but He wants everyone to offer their good intentions, their day’s work, and some prayers; that will help them a lot.” Prayer made all the difference in his life, and the same is meant to be true for each and every one of us. If we have a prayerful foundation to our lives, the storms of life may shake us and even batter us, but they will not overcome us. The more we pray, the more God is with us—and His love, generosity, and grace will bring about blessings, and sometimes even miracles, for those who trust in Him.