So, What is Love?
Share:FacebookTwitterLinkedInEmail

So, What is Love? In preparing couples for marriage, I enjoy asking them what seems to be a simple question: “So, what is love?”

Now for many of us, the word love is among our favorites. On any given day, I would wager that we utter the word many, many times. But do we really love our coat, car, boat, or cheese-and-pepperoni pizza? And my couples? Most tell me that love is about feelings, caring, attraction, or concern—for others. As far as providing a definition of love on a moment’s notice, they are all good answers.

The ancient Greeks identified four forms of love: Kinship (storge)—described as the love a parent has for their children; Friendship (philia)—a relationship of mutual affection between people; Romantic (eros)—the expressive and pleasurable feeling from an emotional attraction towards another person; and Divine (agape)—the highest form of love. It is the love that God has for us and the love that we (should) have for God.

In my own life, it was not until my wife was pregnant with our first child that I came to understand the true meaning of love. Upon hearing that good news, I remember being filled with many emotions: excitement, joy, and anticipation. And, truth be told, I was even smitten with a bit of fear. After all, I was going to be a father!

During those nine months, I remember sleeping one evening and feeling the sensation that someone had kicked me. When my wife insisted that it wasn’t her (even though I may have deserved it), I said “Oh, I know who did it.” I also remember the joy experienced in creating a nursery and readying our home for a baby.

In reflecting upon that time, those months felt like I was arranging pieces of a yet-to-be-determined puzzle; that is, it remained “theoretical” until one afternoon in early April, at 4:24 p.m., to be exact. For it was at that moment my daughter was born and I first saw her face. While the doctor informed me that she was beautiful, a sarcastic nurse intoned that “she’s yours forever.”

It was at that moment I came to understand the meaning of love. Until then, I could not envision a circumstance upon which I would give up my life for the sake of another. But in that instance, I knew I could and would do just that, if ever called upon. For in my newborn daughter’s face, I had seen the face of God and experienced a sliver of Divine love.

On this Third Sunday of Lent, I tell you this personal “love story” to point out a most basic reality about our loving God. Our God has promised that He will never abandon us. And He has told His people that He will always be at their side.

As Moses stood before those he had led into the desert, he cried out to the Lord: “What shall I do with this people? A little more and they will stone me.” In response, the Lord told Moses to “hold his staff high and approach the rock where I will be standing in front of you.” Upon arriving there, the Lord instructed: “Strike the rock, and the water will flow from it for the people to drink.”

And the water flowed. And the people drank. And once more, the Lord showed that He is a God that never abandons His people.

In time, He would send His Son to dwell among us. Which brings us to this very long narrative from the Gospel of John (4:5-42).

After a long journey, we are told that Jesus had just arrived in the town of Sychar. While seated at Jacob’s well by Himself, a Samaritan woman approached the well to draw water. After Jesus asked her to “Give Him a drink,” she reflexively pointed out the cultural inappropriateness of a Samaritan (like herself) doing such a thing for a Jew.

In an instant, we might wonder: WWJD? Was it Jesus’ goal to quench His physical thirst? Or, was there something else? If you chose the latter, you have chosen wisely. For Jesus was thirsting for love from a human heart. At that moment, Jesus’ sole focus was upon this Samaritan woman.

And so, there begins a dialogue where Jesus probes this woman’s heart in a way only God can. He revealed her many marriages (five), including her present living arrangement. He opened her every wound. He exposed her brokenness. After doing so, He offered her healing with water that lasts! Jesus, The Divine Physician, had bestowed upon her His Divine Love. And it set her free. Now fully healed, she departed and became an evangelist and told others how Jesus had healed and freed her from her sins.

And at this very moment, Jesus invites us to be that woman at the well. He invites us to abandon ourselves and place ourselves in His presence where He may probe our sins and heal us. 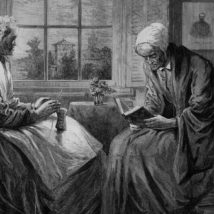